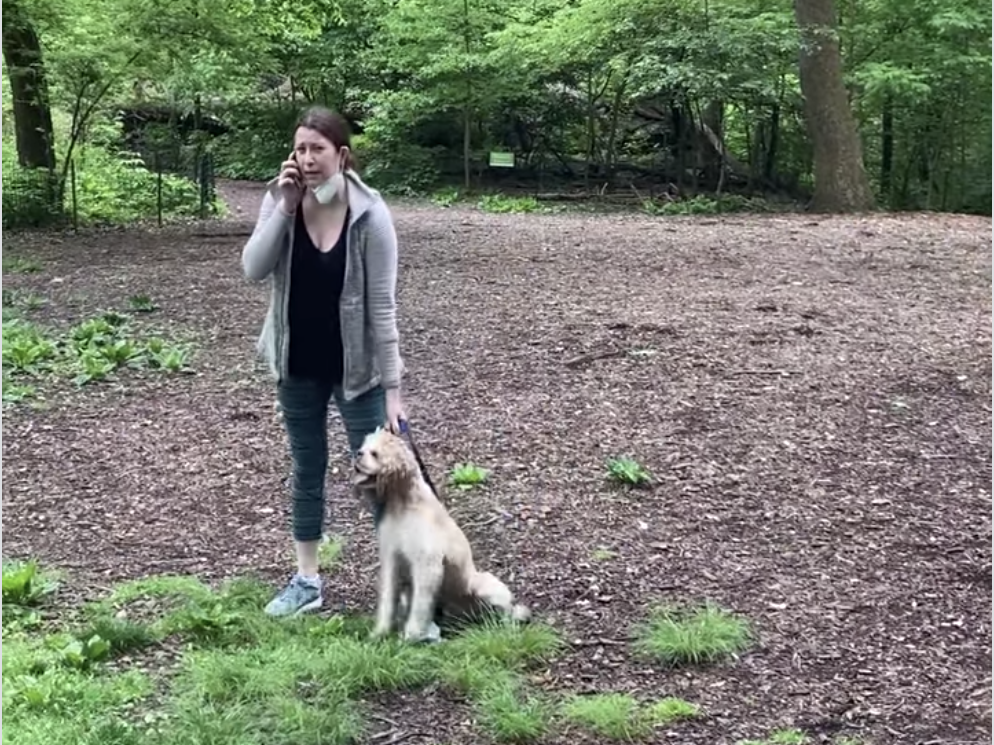 Amy Cooper was captured on video on Monday calling the police on a man who says he asked her to put her dog on a leash in New York’s Central Park.Christian Cooper via Facebook/Screen shot by NPR

A black man says he asked a white woman in Central Park to put her dog on a leash.

Then, video shows her calling police and telling emergency operators that the man was threatening her and her dog. The woman, who has been identified as Amy Cooper, has apologized. But by Tuesday afternoon she was fired from her job at an investment management firm.

“Following our internal review of the incident in Central Park yesterday, we have made the decision to terminate the employee involved, effective immediately. We do not tolerate racism of any kind at Franklin Templeton,” the company said in a statement posted to Twitter.Franklin Templeton✔@FTI_US

Following our internal review of the incident in Central Park yesterday, we have made the decision to terminate the employee involved, effective immediately. We do not tolerate racism of any kind at Franklin Templeton.39.3K2:24 PM – May 26, 2020Twitter Ads info and privacy13.2K people are talking about this

After video of the encounter was posted to social media, she said her behavior was “unacceptable.”

“It was unacceptable. And you know words are just words and I can’t undo what I did. But I sincerely and humbly apologize to everyone. Especially to that man, his family,” Amy Cooper said in an interview with NBC New York on Monday evening.

Video of the encounter

Christian Cooper recorded part of their encounter. It has since been viewed hundreds of thousands of times on social media.

The Ramble is a wooded area of Central Park where dogs are required to be leashed. According to Christian Cooper, he started recording after asking her to leash her dog.

The woman is seen in the video approaching the man, holding the dog’s leash in one hand and pulling her dog by the collar with her other hand.

“Please don’t come close to me,” he says, appearing not move closer to her or retreat from her advancement.

As she approaches she tells him that she is going to take a picture of him and call police if he didn’t stop recording her.

“I’m going to tell them there’s an African American man threatening my life,” she responds.

She backs away from him and places the call while continuing to drag the dog by its collar.

“I’m in the Ramble, and there’s a man, African American, he’s got a bicycle helmet. He’s recording me and threatening me and my dog,” she said.

She repeats herself once more, though Christian Cooper never appears to come any closer to her.

By the third time she is yelling into the phone, this time far with far more panic in her voice.

“I’m sorry. I can’t hear. Are you there? I’m being threatened by a man into the Ramble. Please send the cops immediately!” she screams.

NPR has requested comment from both Amy Cooper and Christian Cooper but neither immediately responded.

The aftermath of the incident

In a statement to CNN, Amy Cooper said, ” ‘I’m not a racist. I did not mean to harm that man in any way,’ she said, adding that she also didn’t mean any harm to the African American community.”

Her employer, Franklin Templeton, initially said in a statement late Monday that it is investigating the matter.

“We take these matters very seriously, and we do not condone racism of any kind. While we are in the process of investigating the situation, the employee involved has been put on administrative leave,” the company said. Franklin Templeton✔@FTI_US

In response to an incident involving an employee on May 25th, Franklin Templeton issued the following statement.

The encounter is being highlighted as another example of a white person calling law enforcement to report black people for doing seemingly banal things.

Christian Cooper said his encounter is not an uncommon experience for many black people in the U.S.

“I don’t think there’s an African American person in America who hasn’t experienced something like this at some point,” Christian Cooper told the The Washington Post.

“I don’t shy away from confronting the scofflaw when I see it. Otherwise, the park would be unusable — not just to us birders but to anybody who enjoys the beauty,” he said.

He went a step further in an interview with NBC New York and linked his experience to that of another black man, one who died during a recent encounter with a group of white men in Georgia.

“I’m not going to participate in my own dehumanization,” Cooper said. “We live in an age of Ahmaud Arbery, where you know, black men are shot, gunned down, because of the presumptions that people make,” he added.

So far three men, all of them white, have been charged in the killing of Arbery, who was shot dead in February in Glynn County, Ga.

Amy Cooper’s dog has been “voluntarily surrendered,” according to statement posted on Facebook by the Abandoned Angels Cocker Spaniel Rescue, Inc.

“As of this evening, the owner has voluntarily surrendered the dog in question to our rescue while this matter is being addressed,” the rescue group said.

The dog was adopted from the rescue a few years ago, the group added. It reported that the dog is “safe and in good health,” and said it will not be making any further statements on the matter.