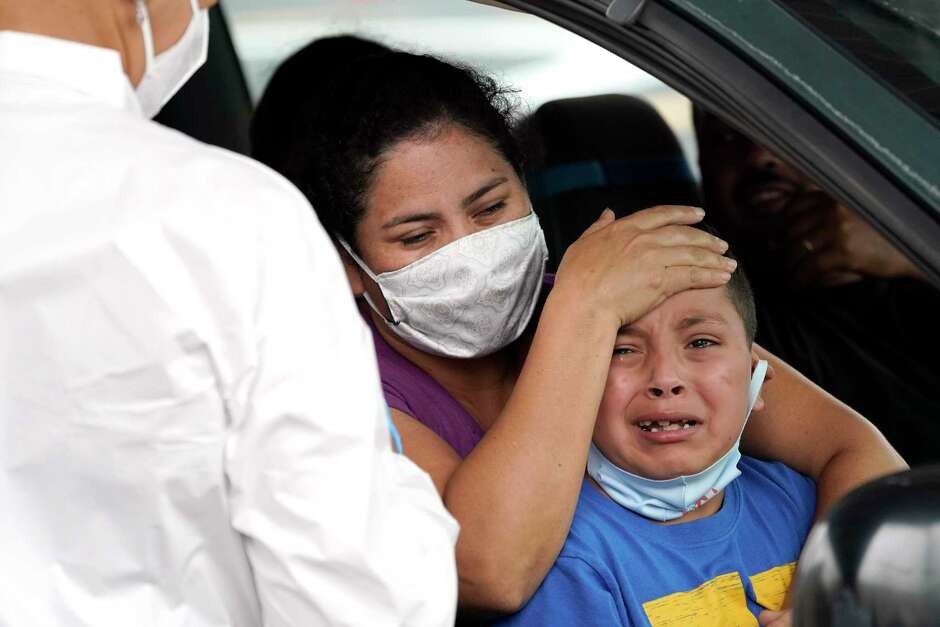 Lillian Palacios, center, holds her son, Daniel, 7, as a healthcare professional prepares to take a sample from him at a United Memorial Medical Center COVID-19 testing site Friday, June 26, 2020, in Houston. The number of COVID-19 cases continues to rise across the state. Texas Gov. Greg Abbott has said that the state is facing a “massive outbreak” in the coronavirus pandemic and that some new local restrictions may be needed to protect hospital space for new patients. (AP Photo/David J. Phillip)Photo: David J. Phillip, STF / Associated Press

San Antonio officials reported 405 new COVID-19 cases and one new death Friday as leaders of the city’s major hospital systems implored residents to take precautions to slow the march of the coronavirus.

The latest death brings the county’s total to 105. The victim was a Hispanic woman in her 50s who had been hospitalized at University Health System, Nirenberg said.

Some 699 people were hospitalized with COVID-19 as of Friday evening, an increase of 71 from the day before.

“It’s June, folks, and we’re in the highest peak we’ve ever had,” Nirenberg said. “If we don’t get a handle now, I shudder to think what it’s going to be in the fall.”

Of those hospitalized, 221 were in intensive care, 19 more than on Thursday, and 117 were dependent on ventilators to breathe, an increase of 23.

Those numbers were significantly higher than at the start of June, when there were 93 COVID-19 patients in area hospitals, 39 in intensive care and 20 on ventilators.

“The hospital system as a whole continues to be under significant stress,” the mayor said.

The positivity rate — the percentage of COVID-19 tests that come back positive — has increased dramatically, even as providers have greatly expanded testing. On June 1, the positivity rate was 7.1 percent. On Friday, it was 19.4 percent.

“That means it’s just going to be so much easier to transmit it out in the community without you realizing that you’re potentially transmitting it to other people,” said Jennifer Herriott, deputy director of the San Antonio Metropolitan Health District.

State officials, meanwhile, reported 5,102 people in hospitals with COVID-19 across Texas on Friday, the highest number since the start of the pandemic. The state reported 5,707 new confirmed cases for a total of 137,624.

The spike in cases prompted Gov. Greg Abbott to close bars immediately and place further restrictions on how many people can sit inside restaurants. Abbott had allowed restaurants to operate at 75 percent of occupancy but scaled that back to 50 percent starting Monday.

“It looks to me like he’s moving in the right direction,” Bexar County Judge Nelson Wolff said Friday.

At the start of the pandemic, Abbott left decisions such as stay-at-home orders and restrictions on businesses to city and county leaders. But the governor later took that authority away from local officials and asserted control over the reopening of the Texas economy.

Amid the recent explosion in cases, Abbott has allowed local leaders to set new restrictions.

Last week, Wolff and Nirenberg handed down orders compelling businesses to require customers and employees to wear masks or face coverings while on their premises. If businesses don’t comply, they face fines of up to $1,000.

In a surprise, Abbott allowed the orders to stand — and other cities and counties followed Wolff’s and Nirenberg’s lead.

Nirenberg, who spoke with Abbott by phone Friday, said the governor indicated he might allow additional local restrictions if cases and hospitalizations continue their rapid ascent.

Nirenberg said he “very candidly told him, ‘We’re in a rough spot here in San Antonio. We need either some local latitude or some state action to scale things back.’”

The mayor said Abbott described the public health crisis as “a dynamic situation,” adding: “He recognizes the local needs and is going to act accordingly to make sure that we can get a grip on this virus.”

On Friday, City Manager Erik Walsh limited the size of gatherings in city parks and plazas to no more than 10 people starting Saturday. Pools and splash pads slated to reopen July 3 will remain closed, he said.

That limit on gatherings will apply to political protests if demonstrators congregate in city parks, Nirenberg said.

“We are going to kindly ask people to think about the pandemic that we’re in and disperse,” Nirenberg said. “This is about making sure that we don’t overwhelm our hospitals. We’re going to ask you to please not do that right now.”

Nirenberg also promised to step up enforcement of the mask rules.

“We are going to be making visits” to businesses to make sure they are complying, Nirenberg said. “We’re not going to wait for calls anymore.”

In light of the surge in cases and hospitalizations, the CEOs of the city’s major hospital systems including Baptist Health System and Methodist Healthcare wrote a joint letter asking residents to wear masks while in public, maintain a 6-foot distance from others and wash or sanitize hands frequently.

“COVID-19 is spreading quickly because too many people thought it was safe to go back to life as usual,” the CEOs wrote.

We would love to hear from you, have a story, tip or recipe you would like to share with our readers? Feel free to email it to throughlovewelearn@gmail.com.

How to become Comfortable with being Uncomfortable Pt 2