Sexual Deviant Behavior is Getting F_CKING out control. We must protect CHILDREN!!!!!

You can be gay, binary, or what ever ___ you call yourselves but children should not be subjected to your lifestyle. 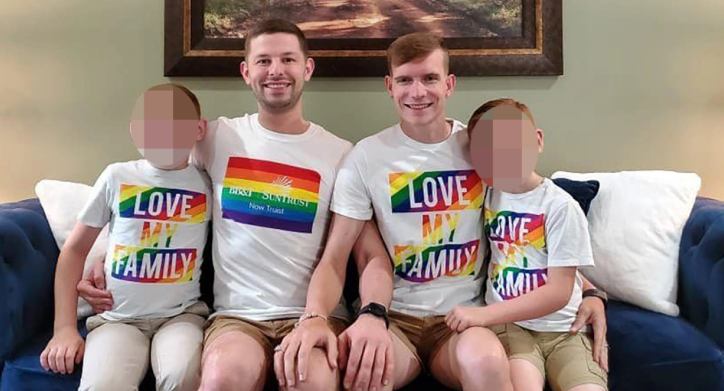 They also sent videos of the abuse to 12 people

A wealthy Atlanta gay couple who have been accused of sodomizing their adopted sons were also pimping them out with other local men, disturbing new documents reveal.

Zachary Zulock and his husband William Dale Zulock Jr. were once the darlings of the LGBTQ scene in Georgia.

In August, the couple admitted to a variety of heinous sex crimes, including rape and forcing their young children to perform oral sex on them, after a midnight raid on their home, during which one of the adults was taken naked from the home.

Now, thanks to research from City hall the ailing couple have been found not only to have abused the children, but are also accused of offering them to other local pedophiles and they are facing life in prison .

Hunter Clay Lawless, 27, and Luis Armando Vizcarro-Sanchez, 25, are also in custody. Lawless told police the Zulocks offered their children to him “multiple times.” He was arrested after downloading a large amount of child pornography that police traced back to his Gmail address. Vizcarro-Sanchez is in custody on a series of unrelated child sex crime allegations. Police say the Zulocks also contacted him. It’s unclear if they ever met the boys or had any sexual interaction with them, but Lawless told police Zachary Zulock invited him over to the house “multiple times” after meeting him through a friend on Grindr.

He was arrested after child pornography investigators traced a large cache back to his Gmail address.

Lawless told police that Zulock contacted him via Snapchat, telling him that he planned to “f–k his son” that night and warning him to expect videos of it.

Cops found photos and videos of Zachary Zulock raping the boy on Lawless’s phone and computer, according to arrest documents.

The couple was building their dream home in Atlanta and earning $7,500 a week, according to some court documents. Before their arrest in August, the couple lived comfortably in Atlanta thanks to Zachary’s banking job. They also told relatives how the state gave them money to pay for the children.

Lawless lives with his mother and was shockingly released on $25,000 bond after his arrest in August.

Vizcarro-Sánchez, the other local man, is in custody also facing a series of unrelated child sex crimes.

He is obsessed with anime and games, according to social media profiles, and is accused of trying to force a 13-year-old relative to have sex.

It is not clear what brought the police to the Zulocks, but a family member spoke at length with the city council about them. That relative said he worried about the couple’s company, especially with the children. The couple remains in custody pending their next court date. There is no clarity whether Lawless or Armando Vizcarro-Sanchez had any physical interactions with the boys.
The report cited a copy of the 17-count indictment against the Zulocks, where sexual abuse against the children first dated to late 2019. In another twist in the case, it transpired that Zachary Zulock was reported to police in 2011 for allegedly luring a 14-year-old boy to his home and raping him. However, the case was reportedly not duly investigated. Questions have since been raised as to how the couple were able to originally fast-track the adoption of the two youngsters.
The married couple’s property has since been taken into custody and their assets seized, according to the Zulocks’ criminal defense attorney John E. Haldi.

Do you struggle with “hot flashes?” #1 SOLUTION

Representative TIKTOK Ban: Should Politicians Keep Out of the App?

The Woman Behind Exposure Ma